“Anywhere on the globe, conflict is never a simple matter in black and white. Instead, there exists an infinite spectrum of intertwining complexities in gray. With pencil and ink, Nelson Gutierrez ponders the grays of dissent within two series of black and white drawings. Masterfully drafted, The Death of Fear series depicts individuals on both sides of protest -activist and suppressor- isolated in fields of blank white. Devoid of any identifiable setting, each figure has been extracted from their original context and drawn from archival photographs documenting actual uprisings, demonstrations, rallies, and riots around the world.
Since 2011, Gutierrez has amassed almost one hundred snapshot illustrations of individualized insurrection. Using portraits the size of a magazine page, he has built a grid of lone active participants, that when displayed together, seem as if they could be counterparts of the same cause.  Engaged in the dance of protest, each person occupying the grid brings their own story and intention to the front lines. What becomes interesting to consider are their commonalities, despite divergent ideologies, faiths, motives, and personal values that may exist within the exhibited matrix. Strategically, the artist withholds overt clues that would otherwise betray their individual political positions or geographic locations, allowing the viewer to relate to the humanity of each person without opportunity for prejudgment. His larger scale drawings brings the viewer eye to eye with the dissenter, cutting the physical distance that too often leads to indifference.” 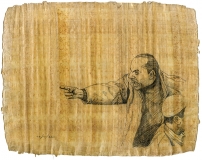 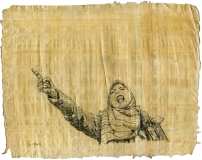